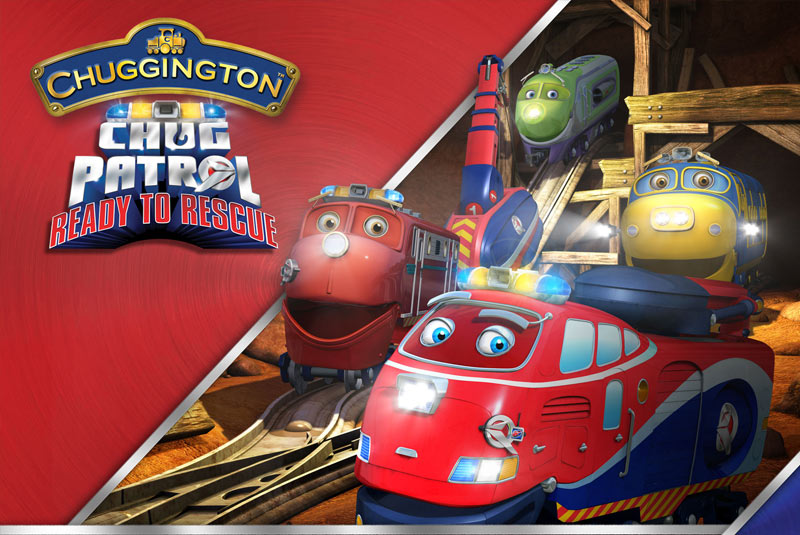 Posted at 09:00h in Recent News by StoryToys 0 Comments
0 Likes

Dublin, Ireland – September 5th, 2013 – StoryToys, a leading publisher of interactive books and games for children, is delighted to announce the release of Chug Patrol: Ready to Rescue, a 3D interactive storybook for children produced in collaboration with Ludorum, the children’s entertainment specialist behind the hugely popular television show Chuggington.

The release of Chug Patrol: Ready to Rescue coincides with the UK release of series four of Chuggington, a hit in 175 territories worldwide with major broadcasters. Chuggington is an action-packed and contemporary animated train series for children. It follows the adventures of three young trainees: Wilson, Brewster and Koko as they take on exciting challenges that test their courage, speed and determination. The Chug Patrol: Ready To Rescue app is available from September 5th in the Apple App Store, Google Play and Amazon Appstore for smartphone and tablet users. It is priced at $4.99 / £2.99 / €3.99

The Chug Patrol app enables children to relive the adventures recently transmitted in the new series on CBeebies.   Children can read or listen to the story, and then turn the page to see a 3D pop-up scene magically unfold. Children can then join in the action for themselves, helping the Chuggers complete various challenges and earning Chug Patrol badges for their collection. Readers will join Koko as she learns control and braking, lay track in the forest with Brewster, explore a mine with Wilson, rescue Emery when his brakes fail, and much more.

“At StoryToys our mission is to create entertaining apps that children love and parents can trust,” said Barry O’Neill, CEO of StoryToys. “We’re tremendously excited to be working with Chuggington and to have the opportunity to bring a whole new dimension of traintastic fun to fans, enabling them to take part in the action with their favourite characters and see if they have what it takes to become a Chug Patroller!”

Chug Patrol: Ready to Rescue will be available on the App Store, Google Play and Amazon Appstore globally starting on September 5th and priced at $4.99 / €4.49 / £2.99.

For further details, screenshots, info or if you would like a review code (for Apple App Store only) please contact press@storytoys.com.

Chuggington is a contemporary, action based, energetic and vibrant CGI series for children aged 2 – 5 years. The series follows the adventures of three young trainees – Wilson and his friends Brewster and Koko – as they ride the rails and take on exciting challenges that test their courage, speed and determination. Along the way, and with help and support from a strong community of engines and people, they learn positive values and new skills empowering them to become the best trainees they can be. Chuggington is directed by Sarah Ball, who won a BAFTA award for her work as a director and writer of Bob the Builder ™Further information is available at http://www.chuggington.com.

Ludorum is a specialist in developing, building, acquiring and marketing global intellectual entertainment properties. Its first global pre-school property is Chuggington™. Ludorum was co-founded and is managed by Rob Lawes (CEO) and formerly CEO of HIT Entertainment PLC which manages a strong portfolio of children’s properties including Bob the Builder™, Barney™, Thomas and Friends™, Pingu™ and Guinness World Records®, and by Dick Rothkopf (Chairman) and the co-founder and former CEO of LEarning Curve, International, the company that held toy licenses for Thomas and Friends and other preschool properties.

Headquartered in Dublin, Ireland, StoryToys creates and publishes highly innovative and entertaining software for children including interactive books and games. StoryToys is a registered trademark and trading name of StoryToys Entertainment Ltd. Apple, iPad, iPhone and iPod touch are trademarks of Apple Inc.,registered in the U.S. and other countries. Google Play and Android are trademarks of Google Inc.